2020 Airport Business Project of the Year: The Braniff Centre

The modern terminal building was designed using inspiration from other mid-century buildings and décor found throughout Dallas. Read original story on AviationPros.com >

The Braniff Centre reconstruction was executed as a historic restoration of the original Braniff Airlines Operations and Maintenance Base. The $100 million master-plan expansion transformed an aviation icon to a modern general aviation facility over a 19-month time frame, now serving the aviation and local community in one reinvented destination at Dallas Love Field (DAL).

“TAC Air - DAL at the Braniff Centre was a long sought after project by TAC - The Arnold Companies to find a home on Dallas Love Field and have a presence in our home market. The location of the original Braniff International Airways Operations and Maintenance Base provided an ideal location on the east side of the field at Lovers Lane and Lemmon Avenue, offering a way to make the facility more than just another row of hangars lining the street,” said Joe Gibney, chief operating officer, TAC Air. “As a key location on the neighborhood street, the retail opportunities combined with the aviation impact, made the project special. Working with the Texas Historical Commission to honor the site of Braniff Headquarters and the architecture of the mid-century that helped define the city of Dallas made it more special.”

The expansion and redevelopment led by TAC Air was made possible with the commitment of the city of Dallas. As Dallas Love Field is reborn through ongoing development projects, the Braniff Centre restoration and expansion restored a portion of the airfield to the early spirit of aviation and the modern jet-setter lifestyle as defined by Braniff International Airways in the late 1950s.

“Dallas Love Field is the second largest general aviation airport in the country, which made this a prime real estate opportunity,” said Casey Park, director of investments for TAC - The Arnold Companies. “We knew the Braniff Centre was a project TAC Air wanted to bring to life. With our partners including the Dallas Cowboys, Blue Star Land a Jones Family company, Lincoln Property company and the support from Randall Reed and the Planet Lincoln auto dealership, 7701 Lemmon Avenue is once again the center of aviation on the east side of Love Field,”

The building was transformed into more than 200,000 square feet of high-quality hangar space and prime aviation support services.

Park said the specific site plan presented a unique opportunity to recreate a space with an aviation history. It sat vacant for many years and required extensive rehabilitation from its glory days to compliant building codes of the twenty first century.

“The opportunity seen by TAC Air was to provide the nation’s first mixed-use facility that combines retail - restaurant and storefront- office space, a car dealership and an FBO – all in one site,” he said.

TAC worked in partnership with the Texas Historical Commission  to protect the integrity of the architecture. It maintained what was there, and because of that, Park said they wound up with something far more iconic than it would have been if they had started from the ground-up.

“Our commitment to take the historical site, clean it up and keep the past a part of the future of Love Field has made this project special for us and the city of Dallas,” he said.

Gibney said they brought the core team from within the TAC Air network and filled the remaining roles with local talent that know and understand the Dallas market. The teams were sent out ahead of opening to train within the TAC Air system with the other FBO locations.

“Upon opening, those same FBOs sent experts from their teams to support the Dallas team and help provide great service expected by our customers,” he said.

Keeping the original cutting edge building design of William Pereira and Charles Luckman that embodied the spirit of flight in the inverted butterfly roof architecture, The Gravity Company and Burns & McDonnell designed the restoration to meet guidelines and preservation requirements of the Texas Historic Commission to keep the building an aviation landmark of Dallas.

Tad W Perryman, vice president, marketing for TAC, said to honor the restoration of the mid-century architecture and harken back to the elegant days of aviation embodied by Braniff Airways, the modern terminal building was designed using inspiration from other mid-century buildings and décor found throughout Dallas. These include the white marble and light walnut rift sawn columns, the glass-topped marble front counter and the use of stainless accents to minimize the design and celebrate the space and location overlooking Love Field.

“In the lobby, a 1/5 scale replica of the Boeing 727-227 N457BN flown by Braniff Airways hangs above, decorating the ceiling space with the livery in mercury blue and adorned with the Dallas Cowboys name and silver helmet featuring the Blue Star,” he said.

Construction has started on a phase two of the project, which will bring a 40,000 square foot hangar and office space to the south side of the Braniff Centre leasehold in fall 2020. Creating an FBO that provides class and modern amenities for businesses and the ones who run them, while still emphasizing the pleasure side of travel, is part of the true reinvention of The Braniff Centre.

Listen & Learn More About The Project

TAC Air Chief Operating Officer Joe Gibney shares insights of the Braniff Centre reconstruction that was named one of the 2020 Airport Business Projects of the Year on a recent episode of the AviationPros Podcast. 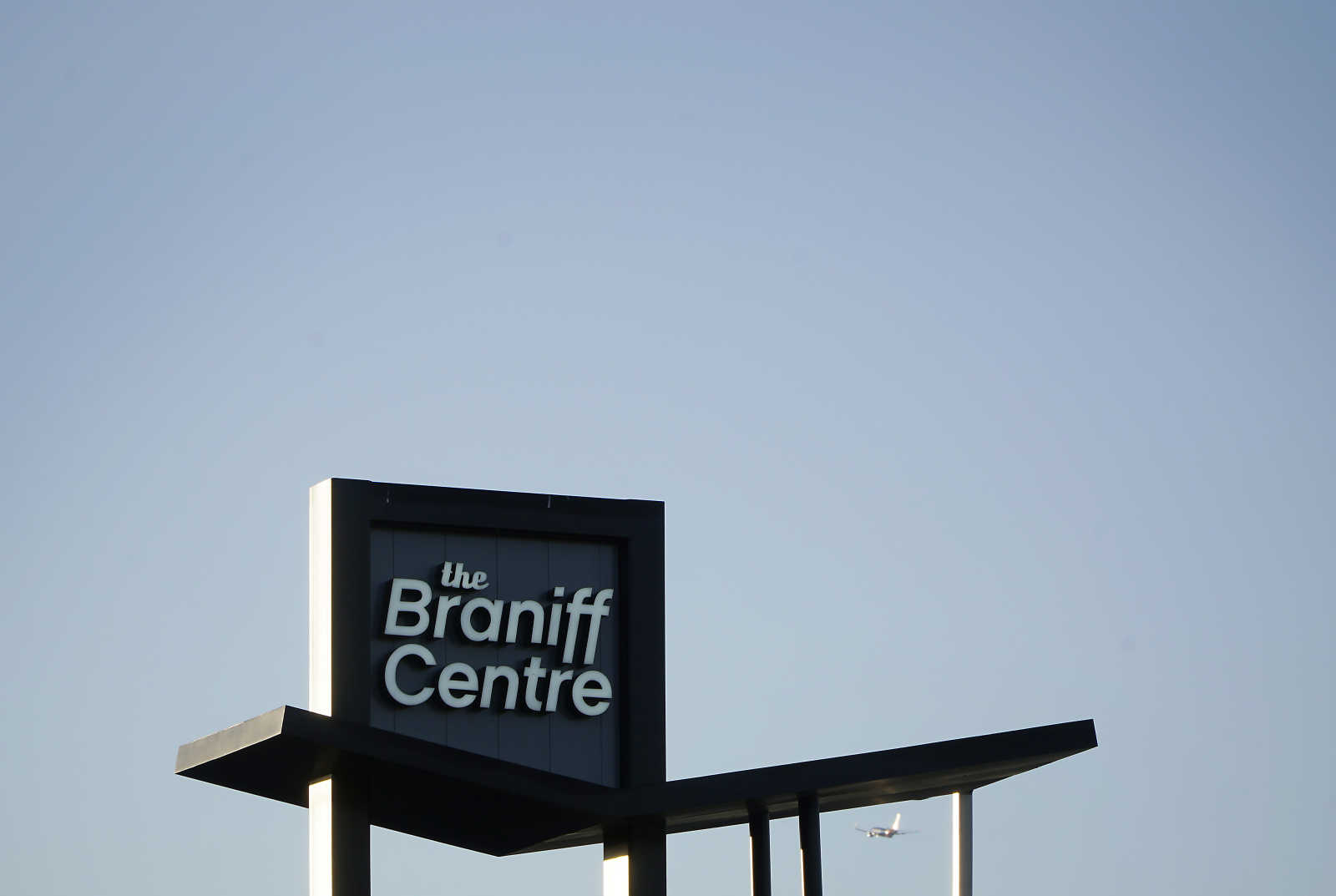 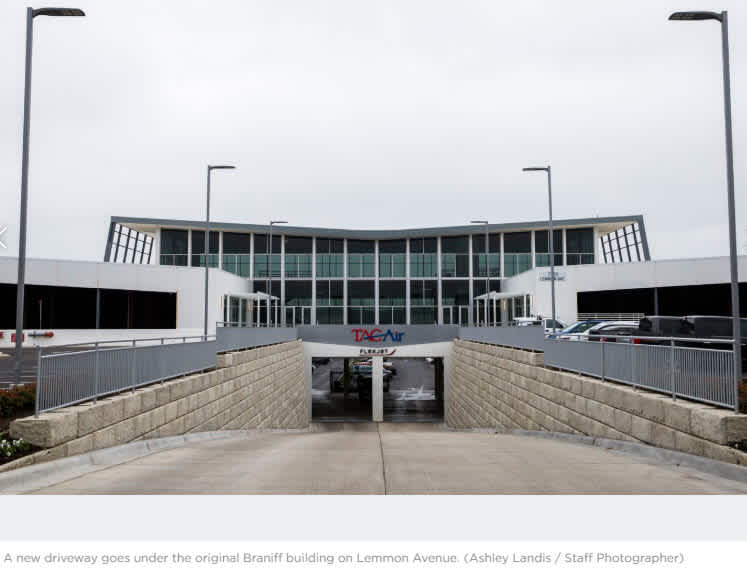 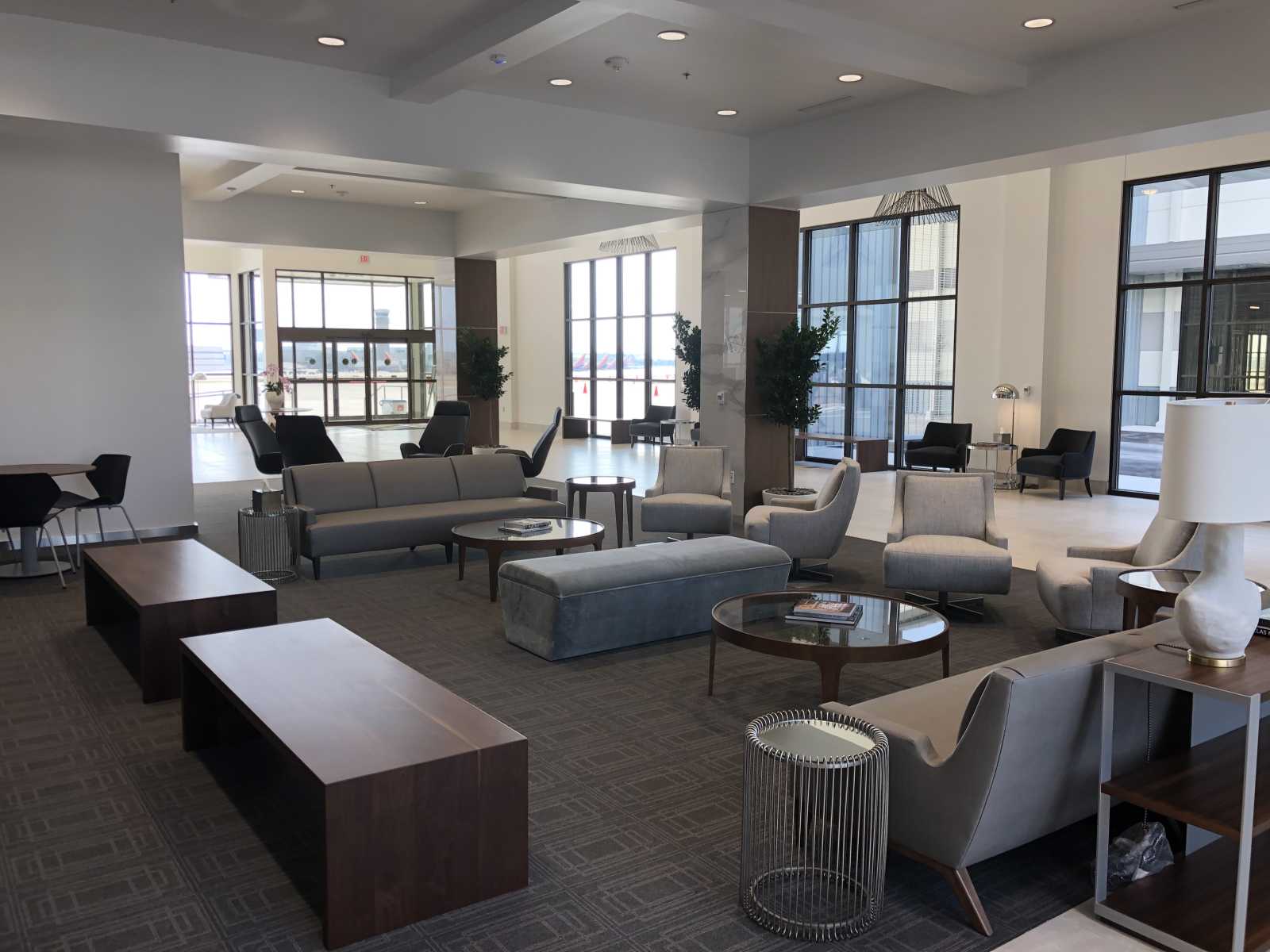