A big reversal is underway in energy futures that are trading lower this morning after an overnight price spike. So far, the selling is relatively minor, and hasn’t threatened the upward-sloping trend lines that have held this rally for more than four months. While a pullback is warranted given the markets’ overbought condition, we saw multiple similar selloffs fail to pick up steam in last week’s big rally, and we’ll need to see product prices dip another nickel or more before we can say this time is different.

News that the Houthi rebels had launched another coordinated missile and drone attack on Saudi Arabian oil assets Sunday had the market spiking overnight, with oil prices up $2/barrel and products up more than 4 cents/gallon. All contracts reached new 12+ month highs in the overnight session, with WTI trading at its highest level since October 2018 and RBOB reaching its highest since April of 2019. The gains proved short lived however as the Saudi facilities are reportedly continuing to operate with minimal disruption, giving buyers reason to doubt the sustainability of current prices after the furious rally in recent weeks.

The great refinery recovery is progressing, with multiple units reported to be initiating restart over the past few days, but supplies remain tight across the gulf coast, causing some slowdowns in pipeline batches that is causing more markets across the country to feel the impact of February’s polar plunge. Rare shipments of gasoline from Europe to the U.S. Gulf Coast are in route, and should help keep the runouts contained.

Money managers are starting to build short positions in WTI and RBOB, cutting the net length held in those contracts modestly on the week. ULSD is a different story with a large increase in new length added last week, betting on higher prices even though diesel values have already nearly doubled in the past four months. The CFTC’s report data is compiled on Tuesday, which means the new shorts got a rude welcome from the huge rally in the back half of the week while the diesel buyers were rewarded.

Baker Hughes reported a net increase of one oil rig drilling in the U.S. last week, with the Permian basin adding three rigs, the Barnett adding one (its only active oil rig) while Williston declined by one and other smaller basins declined by two. The total U.S. count at 310, is at its highest level since the first week of May 2020, but remains 540 rigs lower than where it was 2 years ago, even as oil prices are 10% higher today than they were then.

The Dallas FED released a study last week with projections for Permian production following the anticipated restrictions on Federal lands. The report projects that total output will likely decline by 230mb-490mb per day, most of which will hit New Mexico drillers since all of Texas’ fields are on private or state land.

The EIA this morning reported on the growing role of U.S. Propane exports, which surpassed total diesel exports in 2020. Most of the propane exports are heading to Asia to meet growing demand for heating and petrochemicals, a reminder that the expected growth in petroleum in the coming decades is not likely to be from transportation. 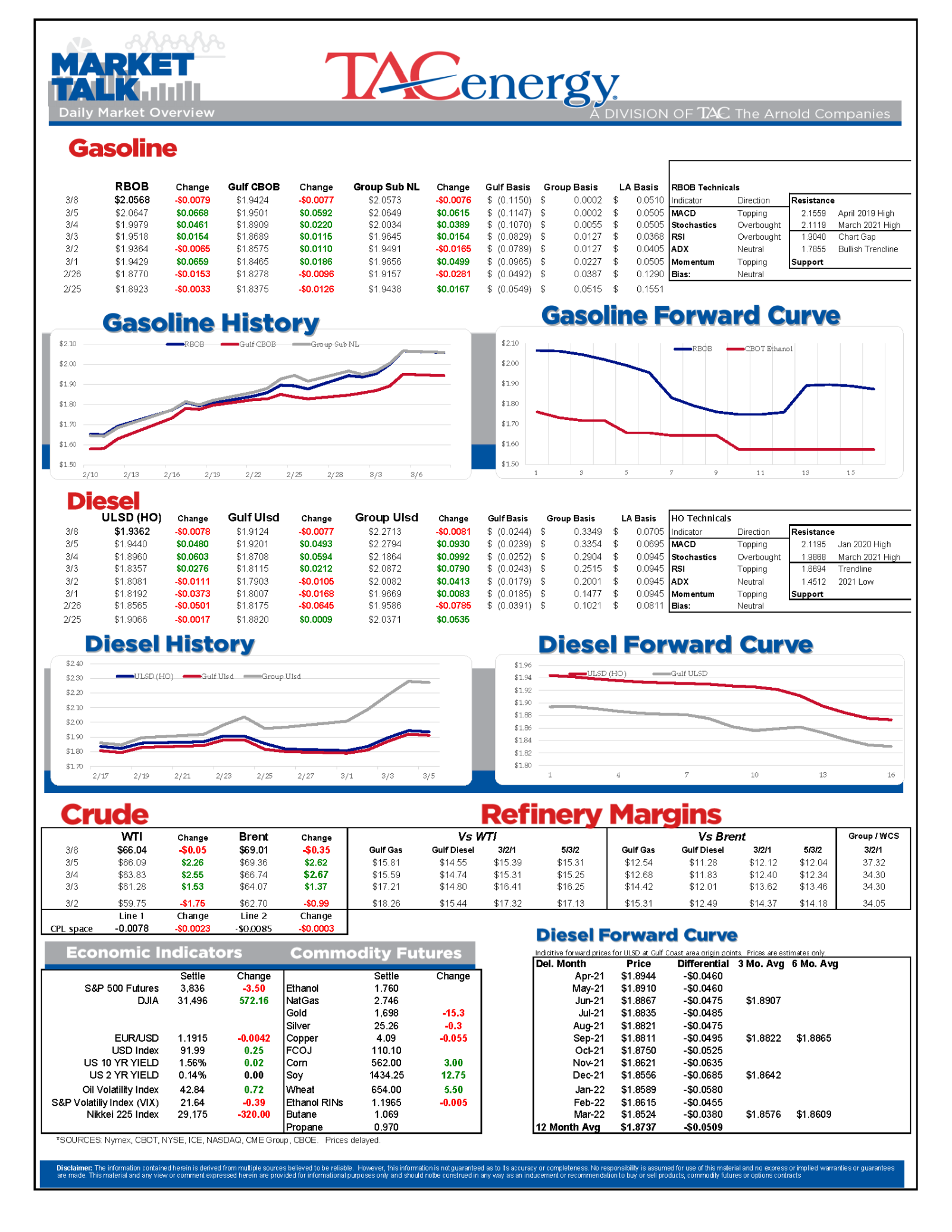