The choppy back and forth action continues with a Wednesday’s price rally largely wiped out in the early going Thursday. The pattern seems to be that if prices are going up, we’ll chalk it up to stronger demand, if they’re down, it will be blamed on a possible new deal with Iran.

While the market seems to be going nowhere, it’s been a huge week on the climate front with two potentially landmark events both happening Wednesday.

A Dutch court ordered Shell (aka Royal Dutch Shell) to cut its carbon emissions by 45% by 2030 in a ruling announced Wednesday. The ruling didn’t say how Shell was supposed to accomplish that, but apparently the company believes fire-selling its refineries is an option. After selling off its Anacortes and Deer Park facilities in the past few weeks, the company announced Wednesday it would also be selling its Mobile AL refinery to specialty refiner Vertex.

Exxon Mobil meanwhile saw at least two, and possibly three, board of directors seats won by an activist investor group pushing for the company to rethink its climate change strategy. What does that mean? Maybe not much in terms of operational changes as the fund controls only .02% of the company’s shares, and the 2-3 board seats won’t be enough to create any majorities. That said, it’s a clear victory in terms of changing sentiment from investors, and quite possibly the loudest moment yet in the crescendo of the great energy transition.

Betting on a bailout? A Reuters report Wednesday said that Delta’s refinery arm has stopped buying RINs in a bet that the white house will offer relief as those credits have surged more than $1/RIN so far this year. We did see PES try a similar strategy a few years ago, and get its RIN obligation wiped out in Bankruptcy court, which seemed to work until they blew up their refinery. RINs were under selling pressure before this report moving 2-3 cents lower on the day, but rallied following its release of this report and wiped out most of those early losses.

In fundamental news from the weekly DOE Report: Diesel supplies declined for a seventh straight week. Considering we’re in the traditional seasonal doldrums for diesel demand, and yet days of supply is below 30, you might start being concerned with securing your diesel supply this fall if you haven’t already.

The DOE’s gasoline demand estimate reached a new post-COVID high, and actually surpassed the levels we saw this week in 2019. It is possible to write off that jump to restocking efforts in the wholesale fuel arena following the great Colonial Panic buying spree the prior week.

The PADD 1 & PADD 3 gasoline inventory charts didn’t change much last week, proving that fixing the near-week-long shutdown of Colonial will take much longer than one week. Outages are dwindling in the South East, but returning to normal supply will still take another few weeks.

While refiners are still operating below capacity, that reality of the time it takes to bring new supply to the consumer is a good warning as both gasoline and diesel days of supply are now back to average levels and demand is continued to climb this summer. The rash of refinery closures and conversions over the past month has left the U.S. refined product market with less of a capacity cushion than it’s had in a decade, and more regional shortages & price spikes could be coming as a result. 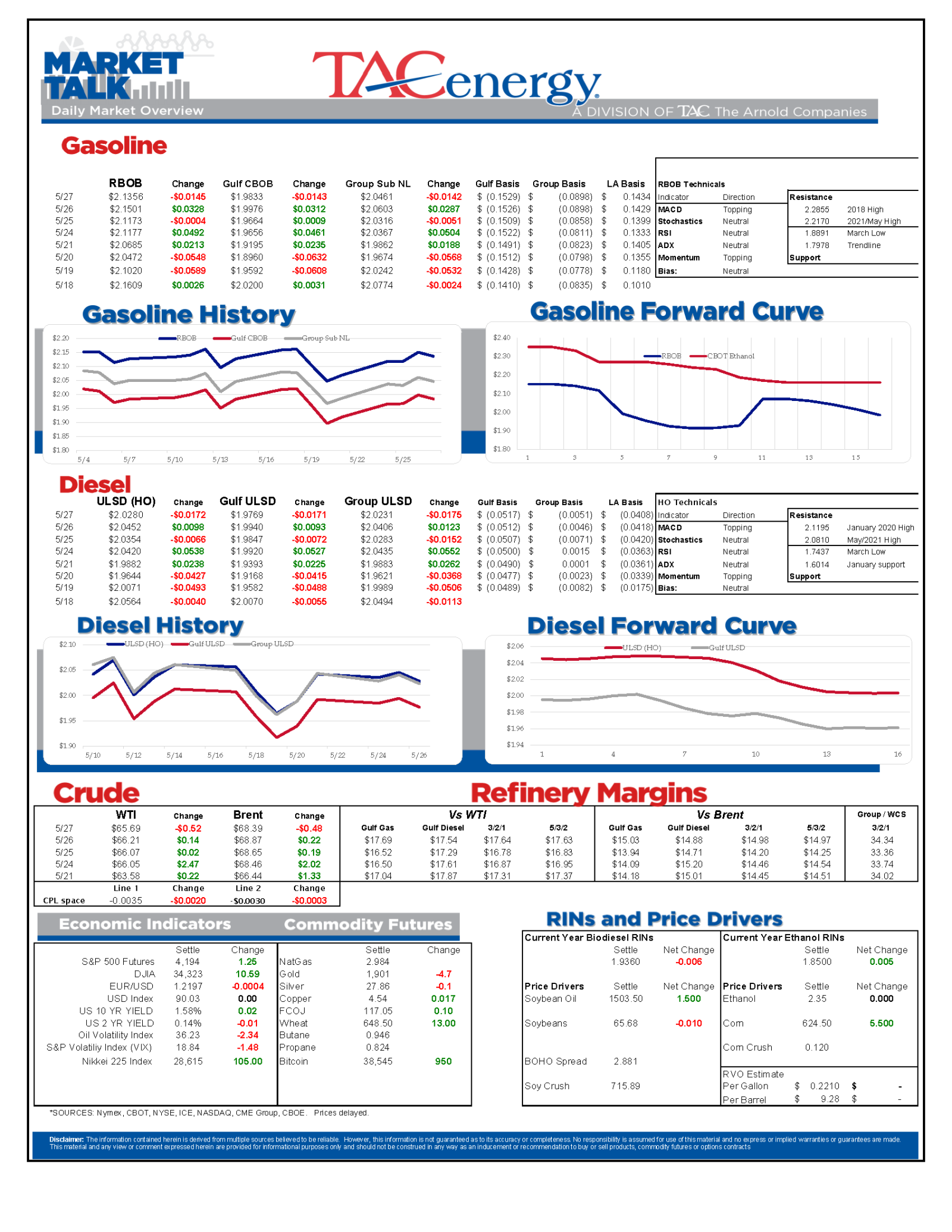