Under pressure: The energy complex is facing another wave of selling for a fourth straight day, and the trend-lines that have held up prices for 4.5 months are finally facing a real test. If that support holds, this week’s sell-off may soon be forgotten, but a break down here sets up another 20-30 cents of downside potential for refined products as they correct one of the largest rallies in history.

RBOB futures did trade higher through most of the night, thanks at least in part to reports of a gasoline spill that forced the buckeye pipeline to close one of its lines that feeds the NY harbor area. The line that’s closed primarily delivers to Long Island, and so far it doesn’t seem to be impacting flows around the NYH trading hub, so that impact should be minimal unless the damage is found to be more widespread. Separate reports that one of the last standing refineries on the East Coast was forced to shut several units for unplanned repairs also helped give gasoline prices a boost overnight, but those gains have not lasted, and RBOB futures are now trading nearly 14 cents below the highs set Sunday night.

According to the DOE’s weekly status report there is still roughly 1.5 million barrels/day of refining capacity in the Gulf Coast offline from where run rates were prior to the Polar Plunge in February. The recovery from that event is now taking longer than what we’ve seen in even the most severe hurricanes of the past 20 years, as the impacts were much more widespread, and most plants did not start shutting down operations ahead of the storm, meaning more damage was likely when they were knocked offline. There are also reports that some plants decided to move up maintenance since the facilities were down anyway, which is probably contributing to the slow recovery. While PADD 3 runs still have plenty of room to recover,  PADD 2 run rates have already reached pre-storm levels and PADD 1 refiners have increased rates to Pre-COVID levels, taking advantage of the better margin environment. West Coast (PADD 5) runs are holding steady, while PADD 4 runs remain not much more than a rounding error.

If you’re reading this, you’re probably not using Microsoft Office 365, which published a root cause analysis of the major outage that affected Outlook & Teams and (even worse for the Gen Z crowd) Xbox live nationwide. If it doesn’t make sense how they can publish a root cause analysis on a problem that as of this morning hasn’t been solved, you’re not alone, but don’t worry they’ll keep telling us it’s fixed. In the meantime, if you’re missing a quote or another regular email, please verify with old school methods like texting or tweeting.

Click here to download a PDF of today's TACenergy Market Talk, including charts from the DOE weekly report. 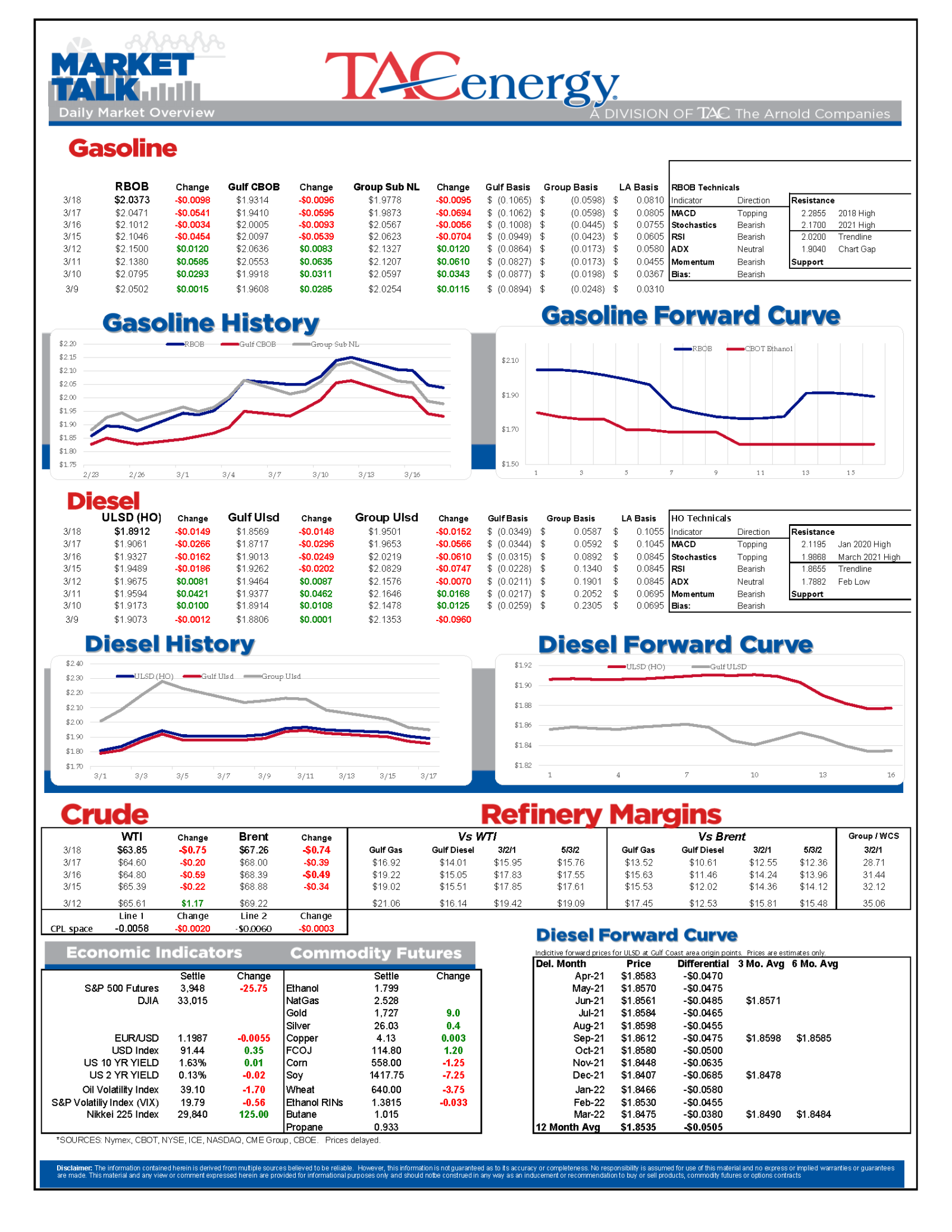