The rally continues in energy markets, with petroleum futures looking like they are going to test the high trades of the year now that buyers are stepping back into the market in earnest. ULSD prices are now less than two cents from their 2021 highs as their winning streak stretches to six straight days, while RBOB is about seven cents away and oil prices need to add about $3 to set new highs. Fundamentally and technically, diesel contracts are looking the strongest, although expectations for a surge in driving demand this summer seem to be underpinning gasoline prices as well.

The DOE’s weekly diesel demand estimates remain above average, and are holding above “pre-COVID” levels, even as trucking, rail, and mass transit demand have not fully recovered. A surge in planting activity (thanks in large part to grain prices reaching eight-year-highs) is getting some of the credit for the strong distillate demand, as is the surge in online ordering in the past year by U.S. consumers that’s created a huge increase in small truck delivery activity.

The EIA’s gasoline demand estimate pulled back on the week, even as signs on the ground suggest that motor fuel consumption may be reaching six months highs. Another sign that the weekly estimate might be light: Look at the large amount of gasoline imports on the week, and yet stockpiles barely increased, suggesting fundamentals may be better than this report suggests. As it stands, the official estimate has gasoline consumption roughly 4% below 2019 levels for this time of year, keeping expectations for a full recovery this summer intact.

Even as demand is getting back towards normal and stockpiles are holding near average levels, refiners are still processing roughly 8% less than their five year average, 1.4 million barrels/day. Some of that reduction comes from the rash of closures that happened in the past 12 months, others due to lingering maintenance issues left over from February’s storms, and some could be that plants still aren’t profitable – even as gross margins have recovered – due to the spike in RIN values this year, that’s pushed renewable obligations costs north of $7/barrel.

RIN prices set new record highs again on Wednesday, even as corn and soybean prices dipped from the high trades we saw on Tuesday. The new EPA administrator testified in front of congress, and was non-committal on the over-due RFS obligation levels (they’ll wait for the supreme court ruling) and on the future of traditional ethanol, attempting to walk the tight rope between the pressure from big-Ag states, and the push to move towards truly advanced fuels. 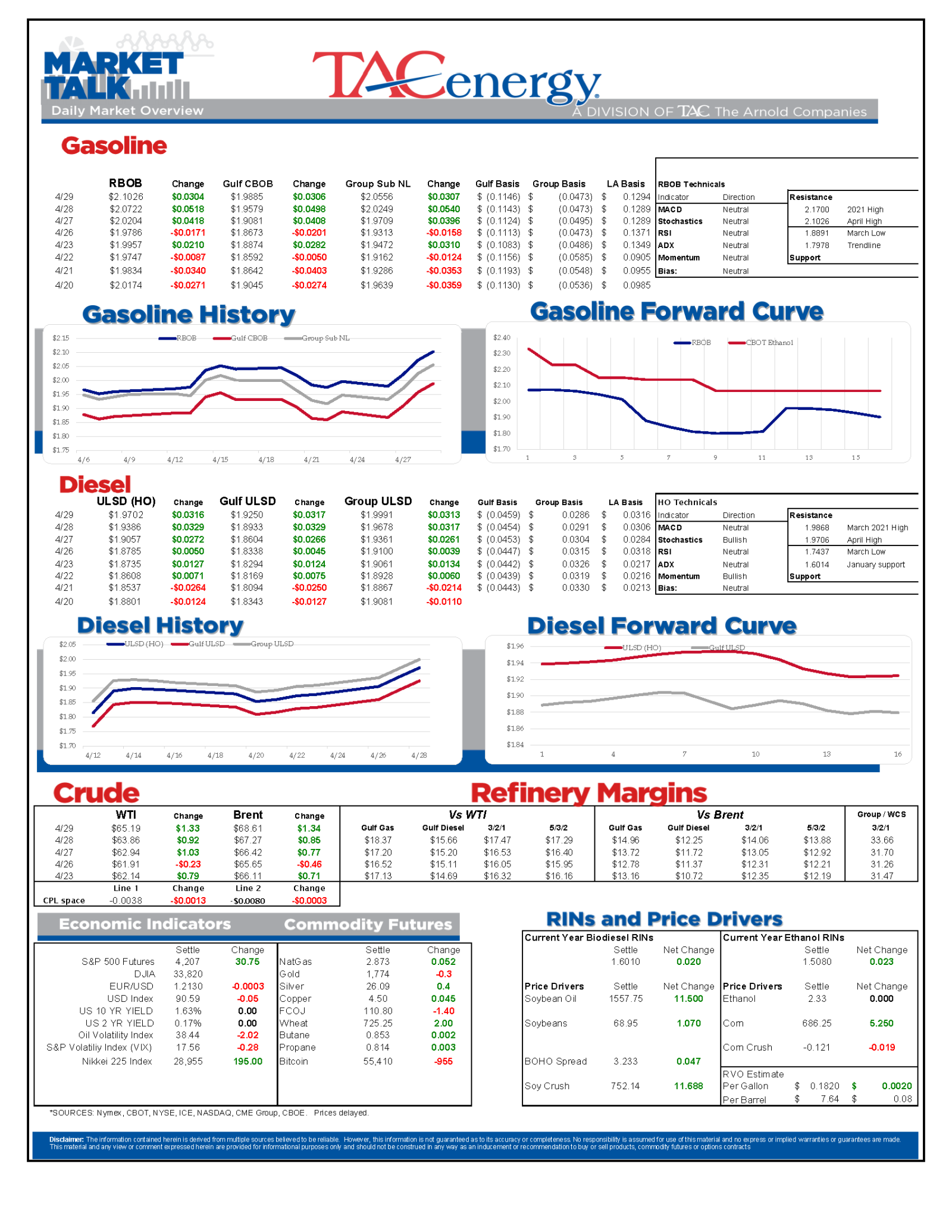