Hurricane Shifts From The Heart Of Refining Country

Energy futures continue to retreat this morning as the strongest hurricane to hit the Gulf Coast in decades appears to have shifted just enough to the east to avoid damaging the heart of refining country. Equity futures are also pointed lower this morning as another weekly jobless claim report north of one million gives a dose of reality to indices that have reached record highs, despite the damage done to the economy by the COVID fallout.

Hurricane Laura made landfall overnight as a Category 4 storm, the strongest to hit the Louisiana coast in 168 years. Another shift to the east prior to landfall meant many gulf coast facilities look like they dodged most of the storms wrath, and some Houston-area terminals are already loading trucks this morning.

Unfortunately for the residents and refineries around Lake Charles, the storm did not appear to move far enough east for them to avoid a direct hit, although it’s too soon to say what damage may have been done to those facilities, but early reports from the city suggest substantial flooding and wind damage. One of three refineries around Lake Charles was already idled due to COVID-related demand destruction, and another was running well below normal rates, so it seems that in total we may only see roughly three percent of total U.S. refining capacity damaged by the storm, compared to estimates closer to 20 percent had the storm hit further west.

Although Lake Charles is an origin point along the Colonial pipeline, as long as the Houston/Pasadena and Port Arthur/Beaumont hubs weren’t damaged, we likely won’t see any major impact on pipeline deliveries. Explorer pipeline did shut down temporarily to allow the storm to pass, but it too may see limited impact thanks to the eastward shift of the storm since it originates from the Houston and Port Arthur hubs.

Now that the storm has passed by the majority of petroleum supply infrastructure, it may become a demand killer as it spreads flooding rains among large parts of the U.S. until re-emerging off the East Coast this weekend.

Yesterday’s DOE report was largely ignored due to the focus on the storm, but it did have some good news as demand estimates reached their highest levels since the start of COVID shutdowns, and in some cases demand has returned to the low end of the five year seasonal range.

Note the large declines in export volumes and refinery runs in September 2017 in the aftermath of Harvey (red line in the seasonal charts below) and you’ll get a good idea of what next week’s DOE report might look like due to the widespread shutdowns ahead of Laura’s landfall. The difference in the two storms so far is that more plants and ports shut ahead of the storm, which should mean a faster recovery when it moves past barring catastrophic damage. 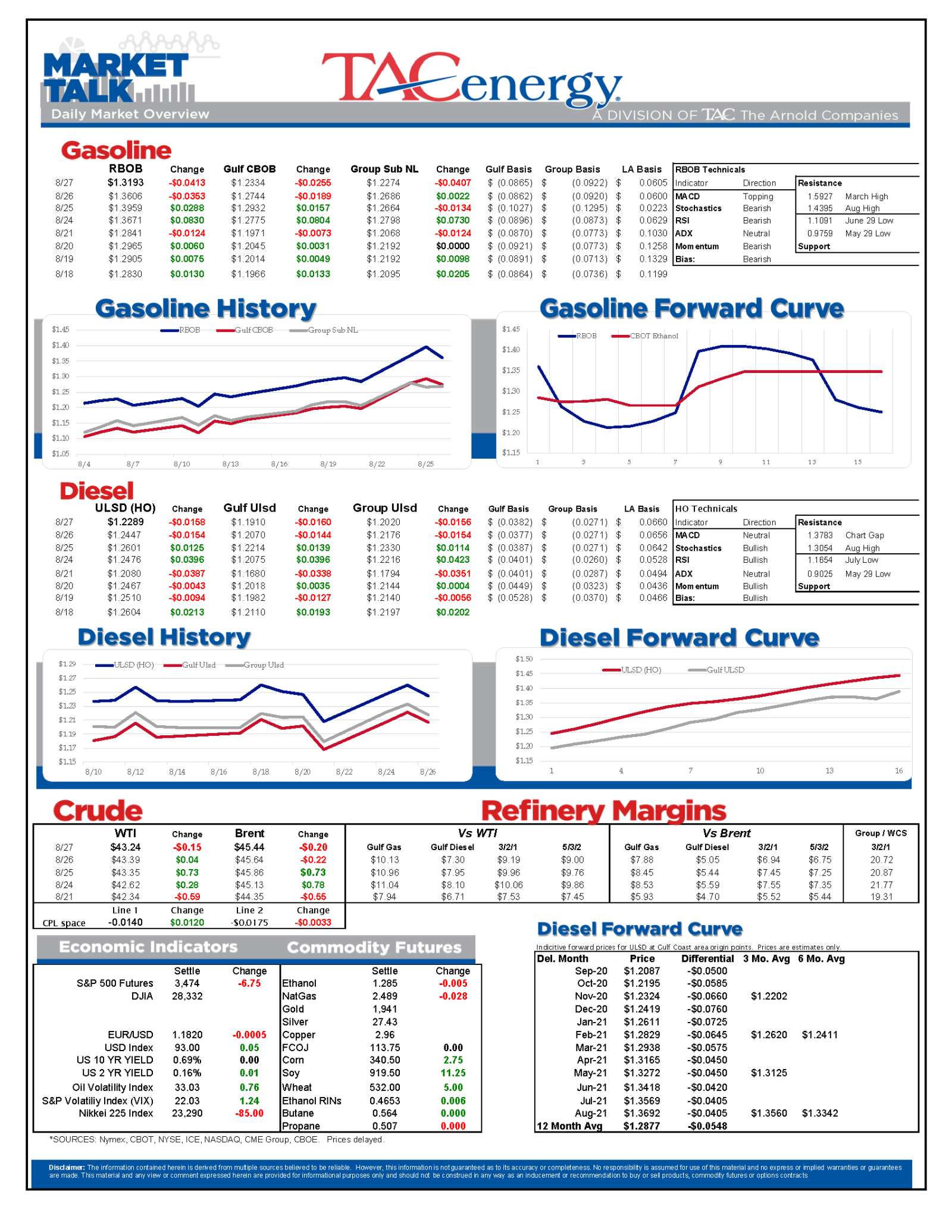 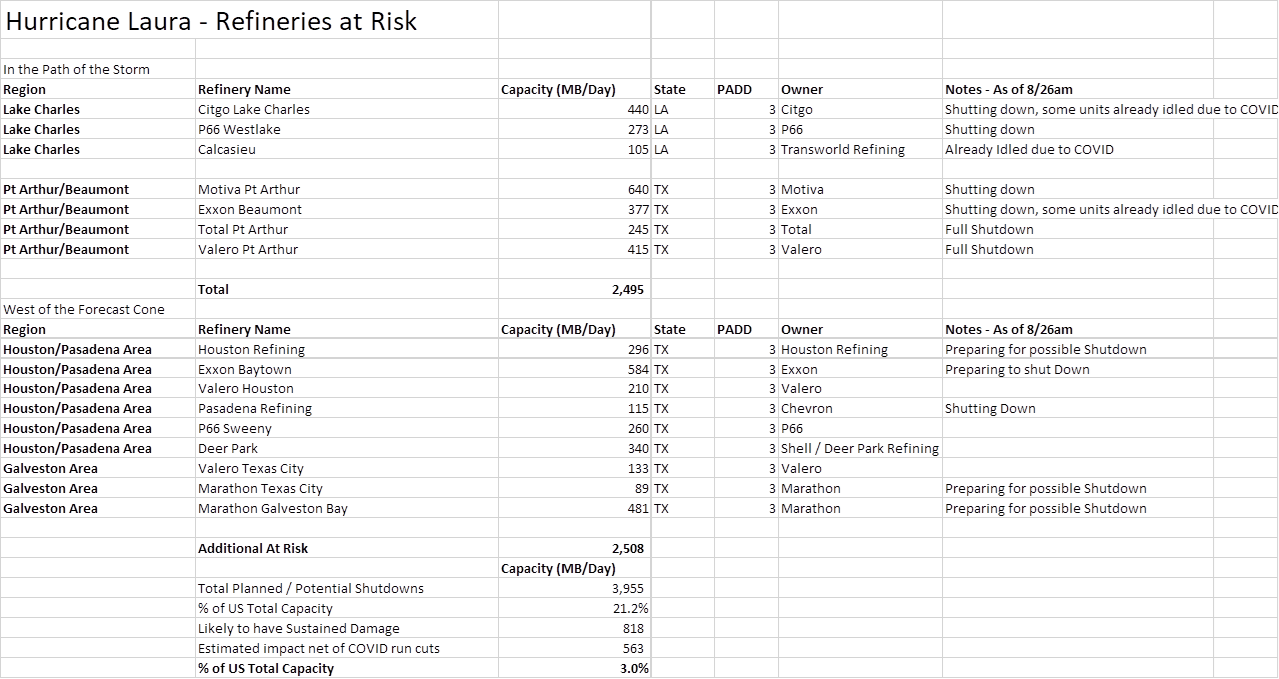 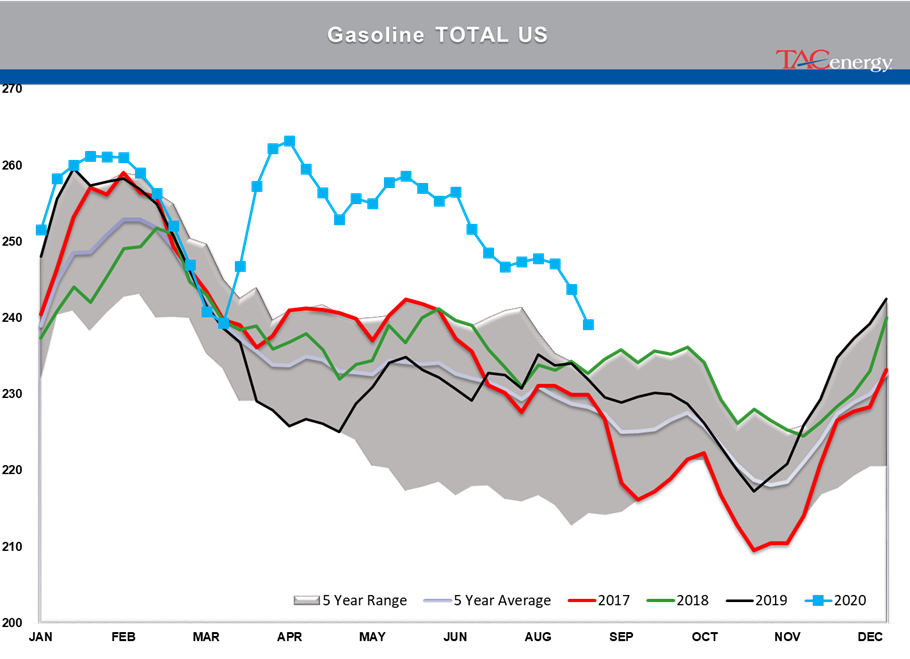