Colonial pipeline began restarting operations Wednesday night, and products futures dropped a nickel. Now that the headlines will move on to other stories, traders can no longer shrug off the big selloff in equity markets this week as inflation has reached a 13 year high, and will also consider the looming drop in demand as consumers will (hopefully) stop filling plastic bags with gasoline. Although the media attention will quickly fade once there are no longer lines of cars outside of gas stations to take pictures of, this situation may have changed perception of the refined fuel industry that many were prepared to cancel just a few weeks ago.

While it may take another couple of weeks for the supply network to truly get back to “normal” as long as product starts flowing again the outages will quickly start to fade. Colonial had not been running at capacity for more than a year prior to this shutdown, so there’s room for extra supply to start moving up the line as operations ramp back up. Values for space on the main gasoline line (Line 1) went positive this week for the first time in over a year as shippers of all varieties wait in the starting blocks to begin the resupply race.

Just as we turn the page on one transportation bottleneck, another one showed up as the I-40 bridge in Memphis was forced to shut after a crack was discovered, disrupting a busy trucking corridor and promising to make an already tight freight market even worse. No word yet if consumers are lining up around Graceland to hoard Elvis memorabilia due to this temporary outage. The good news is that trucks heading to the Valero refinery in Memphis to help supplement supplies across the Southeast during the Colonial downtime don’t have to cross that bridge, but Arkansas suppliers will struggle with this situation.

The DOE’s weekly report Wednesday gave a dose of reality to those expecting demand to hit pre-COVID levels this summer. Total petroleum demand had its biggest weekly drop since stay at home orders smashed all records last year. While gasoline and diesel estimates did see minor declines, most of the huge drop came in the “other oils” category and doesn’t reflect a drop in consumer activity.

U.S. refining capacity dropped another 50mb/day last week, as the permanent closures announced last year continue to make their way into the official numbers. The drop from 19 million barrels/day two years ago to 18 million today is the worst decline in capacity in nearly 40 years.

Adding fuel to the 200 proof fire: U.S. ethanol inventories dropped to a four-year-low last week, even though ethanol production ticked up by 25mb/day. There’s still another 50mb/day or so of production that hasn’t returned since the pandemic started.

RIN Values continue their parabolic move. D6 ethanol RINS were trading around $.36/RIN this time last year, hit $.80 to start 2021, were at $1.31 a month ago and then shot to $1.90 yesterday. D4 values are approaching the $2 mark.  With ethanol, grain and refined products appearing to be topping out and the demand for imports looking like it will subside thanks to the Colonial restart, the stage is set for a pullback, but the big question is will it be of the collapse variety that the wild RIN market has seen in years’ past or a more modest correction since the refiner obligation for the year is still unknown?

The best cure for high prices is high prices: Eight companies – Tesla being one of them – have petitioned to be allowed to generate RINs via their electric vehicle production. While it could be years before congress can even get around to reviewing those proposals, and more years before they’d be implemented if signed into law, it’s a good reminder that at $2/RIN there will be no shortage of new producers trying to take advantage of the RFS program.

Crying uncle: Carl Icahn’s attempt to takeover Delek via a proxy & media battle has failed and CVR announced it would distribute the Delek shares it had accumulated as a special dividend as a result.

The last straw? The refinery FKA as Hovensa was forced to shut again this week after yet another disruption that rained oil on the surrounding neighborhoods. With the EPA already investigating the facility for permit violations, it seems like the efforts to restart this facility that was closed in 2012 may ultimately fall flat.

Click here to download a PDF of today's TACenergy Market Talk, including all charts for the weekly DOE report. 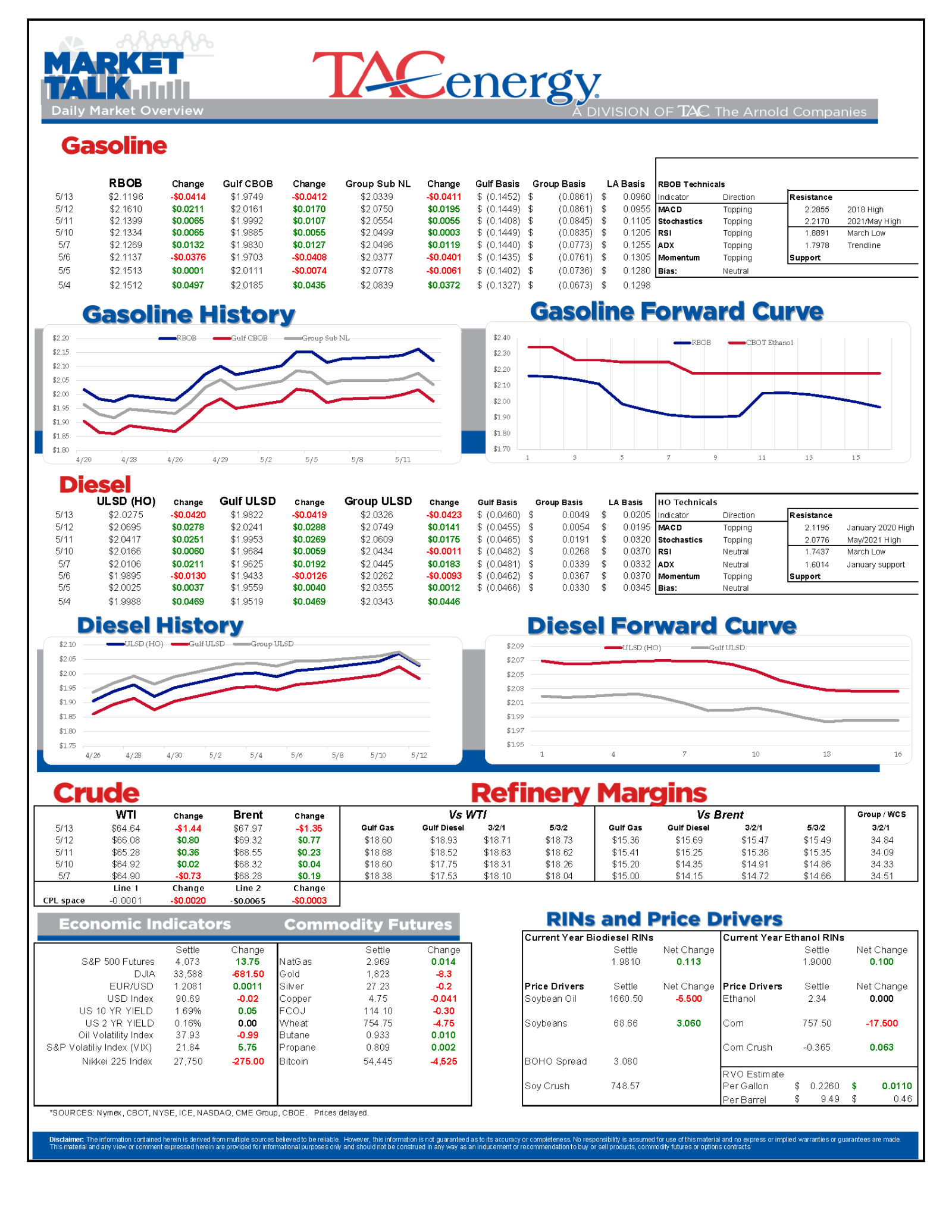