Petroleum futures are working to go 5 for 5 to start the new year as the bull run continues, pushing ULSD back to the $2.50 mark and WTI above $80 in early trading. Cash prices haven’t seen as dramatic a move as futures in most cases as they had to overcome the New Year’s Eve futures selloff that didn’t hit wholesale prices until Monday night, but are still pointing towards healthy gains, despite evidence that we’re experiencing the worst fuel demand in parts of the country since the 2020 lockdowns as a parade of winter storms has accentuated the typical seasonal slowdown.

While there’s no doubt the bulls took control of the energy markets this week, now that the short term technical targets have been reached, it looks like we could be due for a period of sideways trading, especially if we lose upward momentum in equity markets. Longer term, the bulls will need to find a way to make a run at the October highs in the next month or two – which is easier said than done this time of year – if they’re to avoid a longer-term bearish pattern on the charts.

The December Jobs report showed another healthy month of increases with 199,000 jobs created, while both the headline and “real” (U-6) unemployment rates continued their declines.   In addition, the October and November estimates were revised higher by 149,000 jobs, adding to the overall feeling of strength in the labor market. Energy prices haven’t reacted much to the report, but equity prices are coming under pressure and interest rates are pushing higher again as we remain in a “good news is bad news” market since the strong job market just gives the FED another reason to shut down the money printing presses and start raising rates.

Back in the USSR:  Russian troops have invaded intervened to quell deadly protests in Kazakhstan over the removal of fuel price subsidies. Those protests appear to also be interrupting crude exports from the country’s largest oilfield, which – combined with ongoing disruptions in Libyan - is likely to keep actual production from the OPEC & Friends cartel well below their target levels.

RIN prices have continued their steady march higher this week, and D6 (ethanol) values are now threatening the downward sloping trend-line that pushed prices from $2 in June to 80 cents in December. There doesn’t appear to be any “new” news driving the run-up in RINs, but the ongoing industry statements regarding the EPA’s proposed rules for 2020-2022 suggest that if those RVO’s become law, we’re destined to see another extended court battle.

Ethanol prices meanwhile continue to see a dramatic drop, with most US spot markets now trading $1.50/gallon or more lower than they were just 6 weeks ago the winter demand doldrums that are being felt by gasoline producers all over the country are spilling over into the alcohol fuel arena and helping alleviate the supply bottlenecks that drove the record setting backwardation last year. 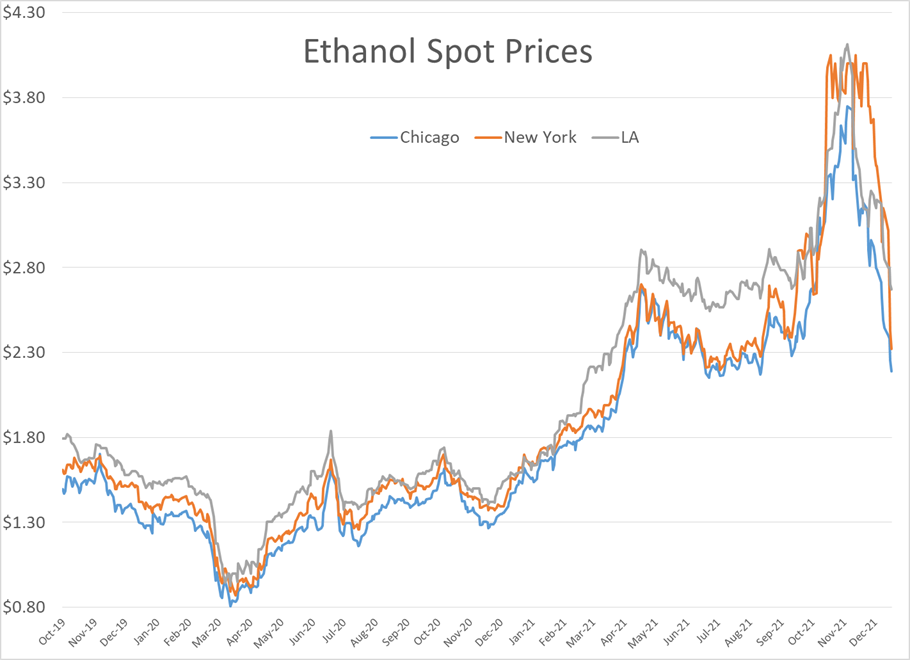