Several energy contracts have dropped to 3 month lows this morning as the selloff stretches to a 6th straight day. The main driver of the big move today is an apparent taper tantrum as the FED telegraphs an end to its most recent round of money printing. A secondary catalyst seems to be the fallout from two tropical storm systems reaching the major population centers along the East Coast that may keep many drivers off the road, at a time when it’s already looking like domestic consumption is heading lower.

Energy futures were already looking like they may be due for a big move lower prior to the FED minutes release, and the selloff in equities seems to be adding to the negative sentiment even though the correlation between daily price movements in the two asset classes had broken down in recent weeks. Whenever FED stimulus is a market driver, we experience the strange “Good news is bad news” phenomenon. Yesterday was no different when the FOMC minutes suggested that the Delta variant won’t derail economic recovery in the US (Good news!) which means the FED has less reason to keep injecting money into the system (Bad news for investors wall street bankers!)

As the remnants of TS Fred dump heavy rain across large parts of the country, Henri has gone from an afterthought to a real threat as forecasts continue to shift the storm west. 2 days ago there was no threat to land, and now the New York harbor is showing up in some models, while the terminals from New Haven, Providence and Boston are now all in the forecast cone, suggesting the waterborne deliveries that region relies on are likely to face some disruption over the next few days. The good news is the handful of remaining refineries operating in the region are not in the forecast cone, and Colonial pipeline has spare capacity, which should help keep any supply disruptions contained.

Now that the July lows have been taken out for WTI and ULSD (and will be for RBOB once we roll to winter-specs in 2 weeks) the next stopping points on the charts look like the March lows. That means downside targets $57 for WTI, $1.73 for ULSD and $1.87 for RBOB.

Not much to write about from yesterday’s DOE report, and it didn’t seem to have much influence on the crescendo of selling. Diesel demand continues to look strong, holding above its 5 year range, while gasoline demand looks like it may have made its seasonal turn, and dropped back below its 5 year seasonal range. 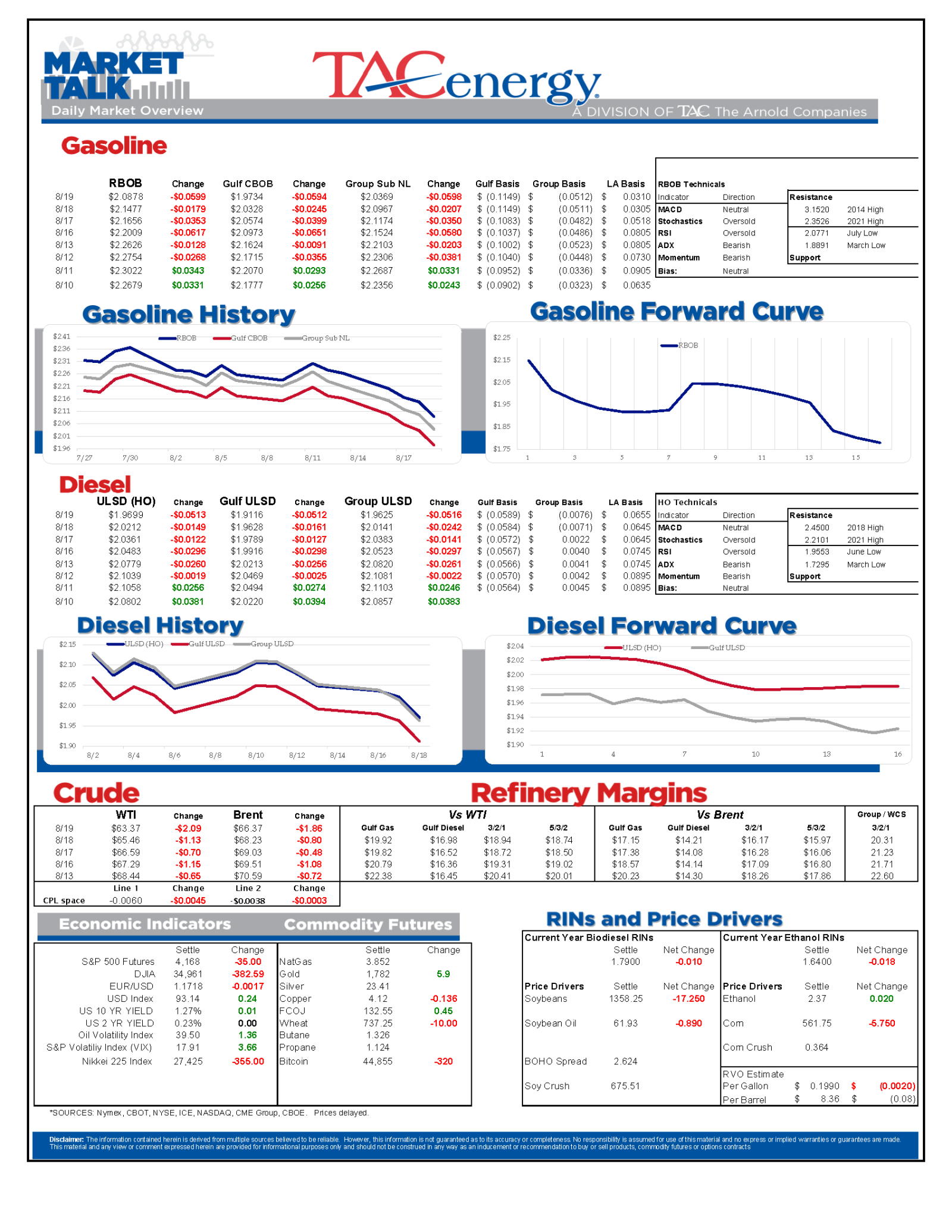