Weak demand estimates reported by the DOE sent a shockwave through the energy arena Wednesday, pushing refined product futures to their lowest levels in two weeks, and some cash prices to their lowest levels in five months. All talk and no action from Washington on a stimulus bill to try and prop up the economy, which does not seem to be helping the sentiment for either energy or equity markets, as an attempt at a recovery bounce overnight has already fallen flat.

U.S. gasoline demand reached an 18 week low according to the DOE’s weekly estimate, and gasoline prices in many markets followed suit, reaching their lowest levels in about the same time-frame.

Gasoline prices in the NYH, LA and Group 3 spot markets all reached their lowest levels since early May during Wednesday’s sell-off, and are threatening further losses after the overnight bounce has fizzled in the early going. It’s starting to feel like a move back below $1 for gasoline is inevitable as the seasonal demand slowdown is just beginning, with more run cuts seeming to be the only option for many refiners that might prevent that next move lower.

Diesel demand also saw a large decrease on the week, but unlike gasoline, that figure started from a much higher level and remains above what we saw for most of the summer.  Diesel prices were also hit hard during Wednesday’s sell-off, but still have more room to fall before threatening the low end of their sideways range.

Refinery runs were reduced across all 5 PADDs last week, as the lingering effects from Hurricane Delta and fall maintenance were both in play. In normal years we’d expect to see fall maintenance peak around this time, and then see refinery runs climb steadily through the end of the year.  With this year being anything but normal, the next few weeks will bring an interesting showdown between the seasonal patterns and a weak margin environment.

Q3 earnings reports are highlighting just how challenging the operating environment is for refiners, and why more run cuts may be likely over the next several months. This morning, Valero and Neste both reported operating losses in their traditional refining segments for the quarter, while their renewable divisions continued to see increasing profits.

The plight of refiners led a group of Senators to ask the EPA to waive the planned increase in renewable volume obligations for 2021, to help those companies deal with the pandemic, and avoid excessive costs for unreachable targets caused by the weak demand environment. RIN prices have surged to multi-year highs in recent days thanks to stronger crop prices and last month’s ruling on restricting refinery waivers.  We’ll see today if the request sparks a pullback, or is shrugged off given the bigger fish that need frying in Washington these days.

Hurricane Epsilon blew up into a major Hurricane in the past 24 hours – far exceeding earlier forecasts – but is expected to stay out to sea and not threaten land. The system being tracked in the Caribbean is given 30% odds of developing by the NHC, but should not impact the U.S. other than perhaps dumping some rain on south Florida. 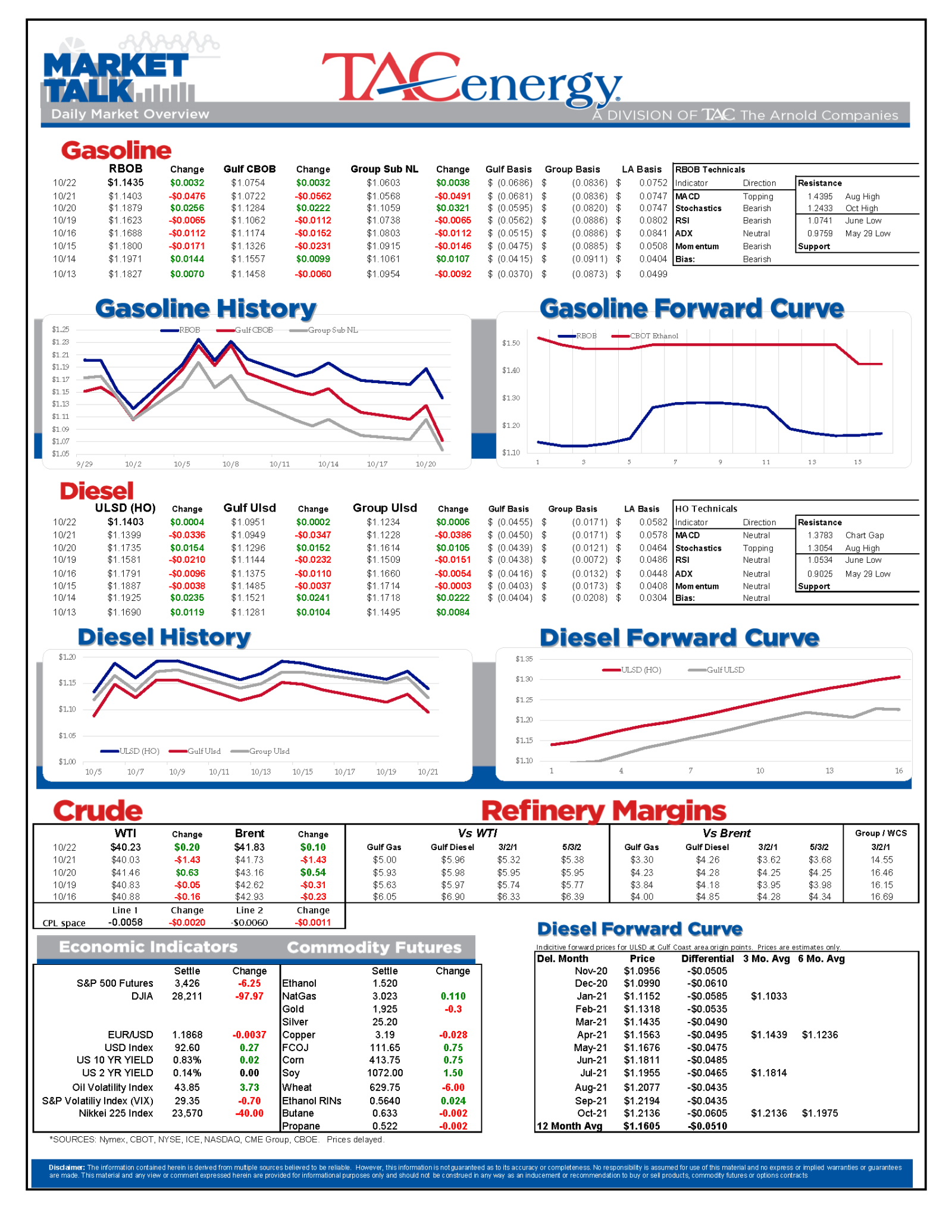 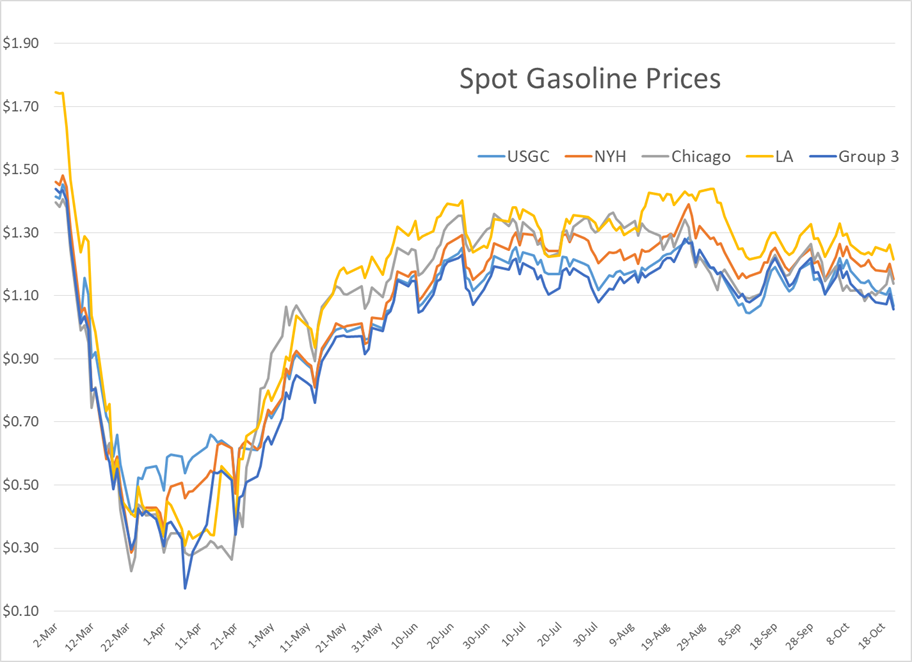 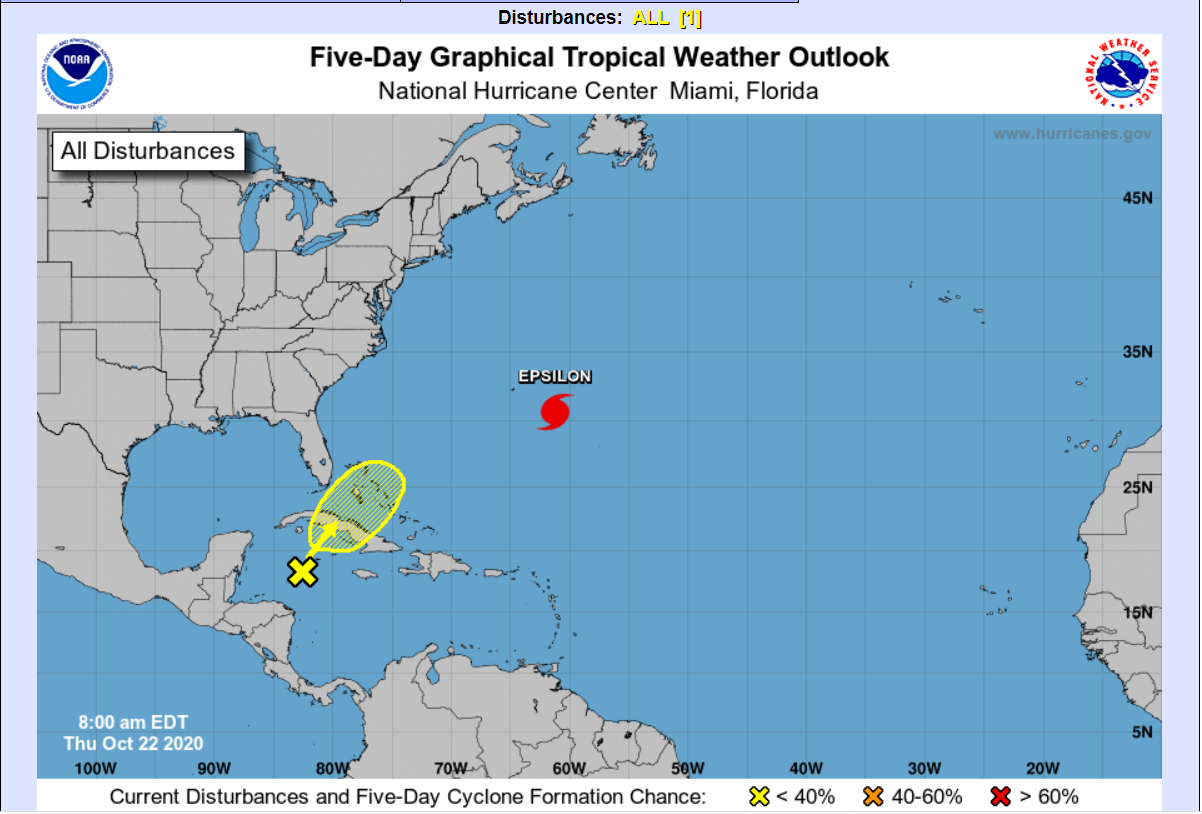