Refined products are seeing large gains this morning after more than 20% of the country’s refining capacity was forced to shut after most of the country was literally and figuratively frozen by record-setting cold temperatures.

This winter storm is now rivalling Hurricane Harvey for its impact on refinery production, and may well surpass that storm when all is done as another day of cold & snow is forecast before things start to warm up. The impacts of this storm are much more widespread, with refining disruptions in PADDs 2, 3 and 5 all reported so far as power outages stretch from the West Coast to the Gulf Coast and now to the East Coast.

The list below details the plants that are said to be shutting down until power and temperatures stabilize. Note that so far the Louisiana refineries seem to have missed the worst of the cold and are continuing to run, whereas most plants surrounding Houston area are having to cut back.

In addition to the refinery disruptions, Explorer pipeline was forced to shut operations due to power problems around Houston, and is expected to attempt a restart Wednesday. So far Colonial pipeline operations are said to be continuing as normal, which is critical to keep this even from causing localized supply shortages to widespread outages.

RBOB gasoline futures were up by 10 cents in overnight trade, but have pulled back to “only” up seven cents this morning, while diesel prices are up around four cents. It’s worth noting that RBOB futures came within a penny of the high trade set last January in the wake of Iran’s attack on U.S. troops, which creates a big resistance layer on the charts right around the $1.80 mark. If knocking 1/5th of the country’s refining capacity offline isn’t enough to break that resistance, we could see this as a major selling opportunity and prices could easily pull back 25-30 cents in the next several weeks.

Another thing that’s probably keeping the price rally from picking up too much steam in the early going is that large portions of the population are hunkering down indoors and avoiding the roads for a few days, which is creating huge spikes for electricity and natural gas demand, but is probably doing the exact opposite for gasoline consumption.

Similar to what we saw during the record-setting hurricane season in 2020, the reduced demand and excess refining capacity sitting idle caused by COVID seems to be acting as a buffer against a more dramatic spike in prices. It will probably be another couple of days before damage assessments can be done, but with warmer temperatures ahead, there’s a good chance most of these refineries will be starting back up before the weekend.

Today’s interesting read: Cleaning up after a 150 year old refinery. 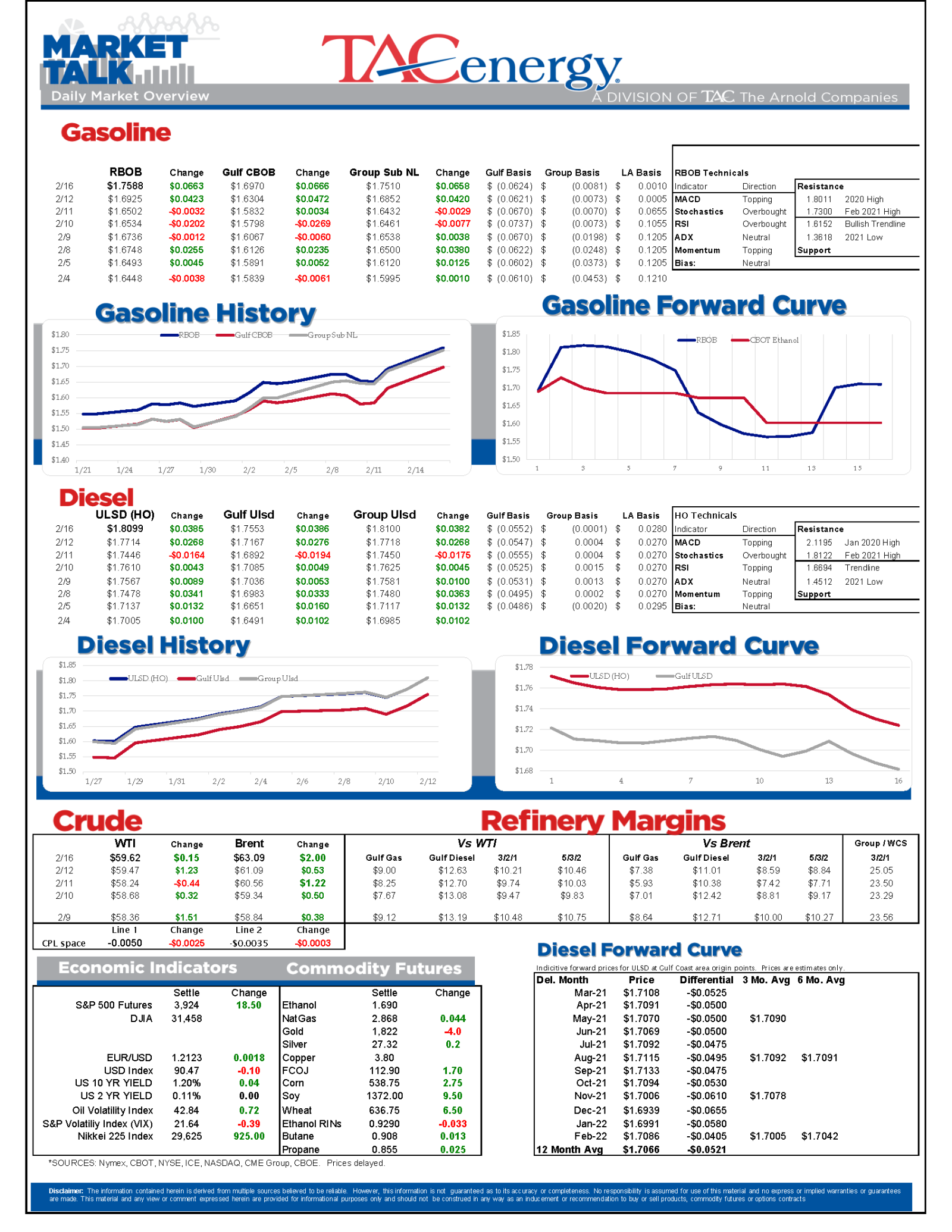